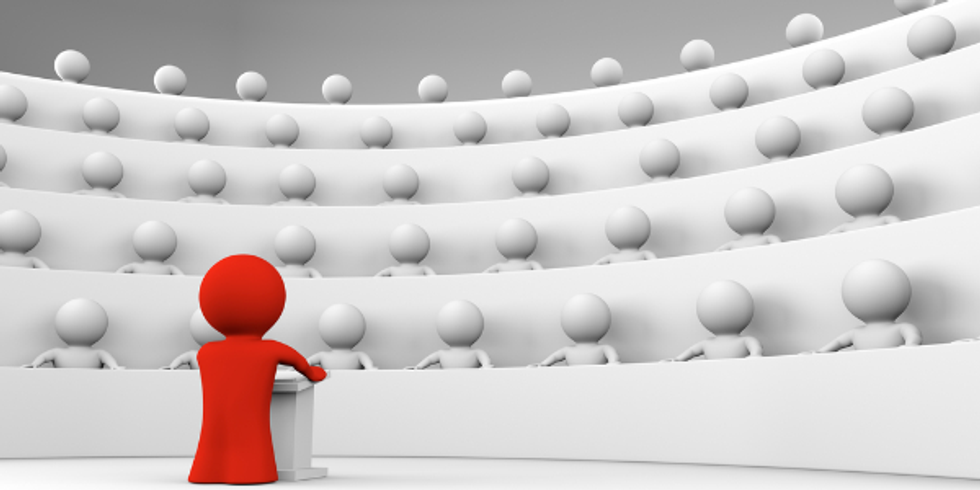 Last week, I shared Communication Sin #2 with you. This week, I bring you #3! I met Eric when I was speaking to a group of job seekers recently. There were 200+ people in the room where I discussed personal branding and the 10 things you need to consider when developing your brand. Eric was sitting in the front row. He had a perma-smile from the moment I started talking. I remember mid-way through my presentation that my eye was drawn to activity in the front row. It was Eric. He was leaning forward and slightly rocking in his chair, clearly full of excitement at what I was talking about. It was like watching a child who was waiting impatiently for their turn to speak.

Another One Of The Four Communication Sins

As soon as I opened up the session to take questions, Eric’s hand shot up and a small, “Oooh!” literally came out of his mouth. It was hard not to smile a little as I focused on this man in his early 50s looking so eager to speak. I decided to put him out of his misery and took his question. Which I soon learned, was not a question at all. Eric Attempts To Steal The Show Eric stood, turned to the audience and said, “I too, and am somewhat of a personal branding expert and agree with all that Ms. O’Donnell has shared with us today. In fact, I’d like to add my own suggestions…” At which point, he went on and shared for five minutes his thoughts and personal experiences. Turns out, Eric had be studying personal branding while unemployed and had decided he was going to help others by sharing what he’d learned – whether they asked him to or not. As you can all imagine, the room became quite uncomfortable. Anyone with an ounce of emotional intelligence could see the audience’s reaction to Eric ranged from laughter to downright anger, the majority of which just looked annoyed. When he was done, I thanked him for his contribution and then got down to the business of answering questions. Unfortunately, that wasn’t the end of my dealings with Eric. When the session was over, I told the group I would stay to field any private questions that people didn’t feel like asking in a group setting. I should have known Eric would latch on to this. He immediately cornered me, literally standing in a manner that blocked other attendees from conversing with me. After conversing with him for five minutes (mostly him telling me what he’d done so far and looking for my approval), I finally said, “Eric, I appreciate your enthusiasm, but I need to spend time with the other attendees now.” You should have seen the look on his face. It was as if I had popped his balloon with a pin. He sulked off, grumbling under his breath something about my lack of gratitude. The next ten people I met with all made comments about Eric. Eric Can’t Let It Go When the room was finally empty, I packed up my things and headed to the car. Guess who was waiting outside? Yep. Eric was there waiting to talk to me. He said, “J.T. I think it’s a shame you aren’t open to working with other experts.” To which I not-so-politely said, “Eric, I am open to other experts, but am partial to working with people who truly understand how to interact effectively with others.” Eric responded, “I work well with others – my entire focus is on helping others.” There seemed to be no way to remove myself from this conversation, so I decided to give it to Eric straight. So, I said:

“Eric, you are and extreme Energizer. Your passion and excitement are very apparent. I realize you want to help others, but you are failing to look at how your Interaction Style is intimidating and even offending others. In your efforts to be helpful, you are being misinterpreted as conceited and self-serving. You need to change the way you present yourself if you want people to respect you as an expert.”

I braced myself for the worst. I was sure Eric would launch into rant about how wrong I was. Instead, there was silence. His body language shifted and you could see I had hit a nerve. He quietly said, “I know I tend to alienate people. I don’t mean to. I just get so caught up in the moment, I can’t control my enthusiasm.” We spent the next half-hour in the parking lot talking about his situation and I coached him on ways he could work to temper his style so that he didn’t scare people away. Is YOUR Energy Pushing People Away? Energizers’ natural strengths are their energy level and ability to speak. They are wonderfully persuasive and engaging people who are quick-witted and can use humor effectively. However, when put in the wrong work environment, or when their style is too intense, their strength becomes their weakness. (You can take the ISAT Test HERE to learn if you are an Energizer.) Want to Learn How to Maximize Your Interaction Style in Your Career? Sign-up for This Webinar Now » J.T. O’Donnell is the founder of CAREEREALISM.com and CEO of CareerHMO.com, a web-based career development company. Image from Tom Poletek/Shutterstock