5 Things To Avoid When Breaking Up With Your Boss 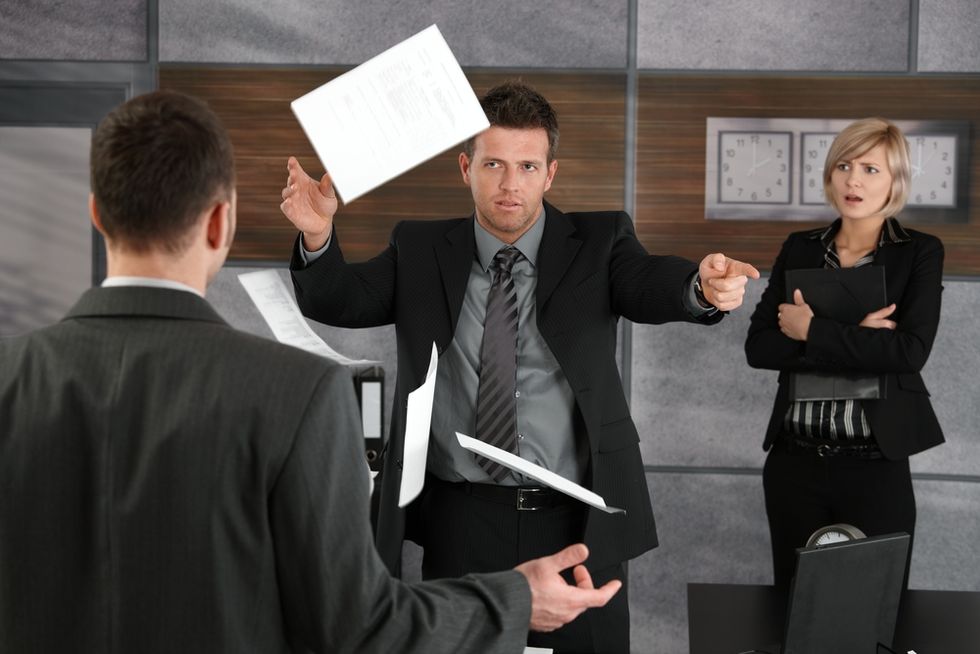 Quitting a job – quitting well, at least – can be hard work. There are plenty of missteps you can make that can end up hurting your career in the long term. QUIZ:Should You Quit Your Job? Check out our list of things to avoid when breaking up with your boss.

It’s been the subject of countless daydreams: quitting your job. You rise from your second-rate, back-breaking desk chair. You stride through the maze of cubicles, eyes forward, deftly deflecting queries and attempts at conversation from your colleagues – Forget the expense report, Cathy. No, Bill, I don’t have an opinion on the President’s jobs plan. And then you reach the door. It’s closed. No knocking today. You grasp the knob. Twist. Throw open the door. Finally, eye-to-eye with your nemesis, you deliver your attack: “Take this job and shove it.” (Yes… we know, Mr. Paycheck didn’t write the song. But he made it a hit.) Pretty sweet, huh? Yeah. But don’t do it. Instead: You must suppress the rage, stifle the snark, subdue the frustration. Smile. Be respectful. Give notice. Offer to help in the transition. It is, as the animatronic children at Disneyland say, a small world, after all. People talk… about you. And unless you’ve recently come into several million dollars and plan on leaving the workforce forever, a less-than-conciliatory exit can come back to bite you later in your career.

You’re beginning to feel like an inmate –imprisoned unjustly, of course – with a release date just around the corner. All those people you work with, however, are still doing hard time… with no end in sight. Don’t talk about all the great stuff you’ll be doing once you’re on the outside. Instead: Leaving on good terms with your colleagues is just as important as leaving on good terms with your boss. Don’t badmouth the company you’re leaving, and don’t brag about that great new company you’re moving to. Answer questions honestly. But bear in mind that these people (some of whom you may actually like) are still stuck in the situation that you’re fleeing. You want them to have happy memories of you. Who knows, you may need one of them as a reference sometime, or even end up working with them again in the future.

You’ve given notice. See that down there, at the end of the tunnel? It’s light. Two more weeks and it’s on to bigger and better things for you (a new and happier job, we hope). This can be a difficult time. While your body is there at your desk, your mind is far, far away. A little slacking is expected. Anyway, what are they going to do about it? Wrong attitude. Instead: Do your best to fend off short-timer syndrome. No matter how you feel about the company or your boss, you want to leave on a high note – be a pro to the end. In your final days, you should strive to work at the same level that you have during your entire tenure at the company. People aren’t necessarily going to remember that you put in back-to-back 18-hour days to finish a crucial, last-minute project two years ago. Colleagues – potential references and networking partners – will remember, however, that you came in late, slacked off and left early before abandoning them forever. You can never make another last impression.

You have a new job lined up, or you’ve squirreled away enough money to sustain yourself for a job search (we advise the latter). Your mind is made up. You’re out of there. So long. Sayonara. See you later. And, then, they hit you with a counter offer to get you to stay. More money, more vacation, better benefits, promises that “things will get better next quarter.” Tempting. But don’t take it! Instead: The moment you gave notice, your relationship with your boss morphed into something that resembles the relationship between an estranged couple. Now your spurned boss, whatever his motives, has entered a bargaining phase that often accompanies a breakup (I can change!). But things won’t get better, likely they’ll get worse. You’ve demonstrated your unhappiness and lack of loyalty by accepting a new job (though some say that employer/employee loyalty is, in fact, long dead). Stick to your plan. Just thank your boss for the consideration and inform him that you’ll still be moving on. Many sources say that most people who accept a counter offer end up leaving within six months, anyway.

And... you’re outta there. You cleared your desk of personal stuff, surrendered your iPhone and laptop, said your goodbyes and crossed that threshold for the last time. You strolled – maybe even swaggered – through the parking lot, fired up the car and headed off toward the horizon. Congratulations. You have made a successful exit. Finally, you can start trashing your former company, boss and colleagues to anyone who will listen. Wrong. Instead: Let the past be the past. Don’t go around badmouthing your former employer, especially not to a new or prospective employer (or through social media). You’ll come off as vindictive... and, maybe, even a bit obsessive. It’s not healthy for your career or your psyche. And you never know when you’ll run into these people again. This post was originally published at an earlier date.

6 Ways To Avoid Burning Bridges By Leaving A Job6 Things To Do Before Leaving Your JobAm I Ready To Quit My Job? Read This First   Photo Credit: Shutterstock