Learn About the Career of a New York City EMT 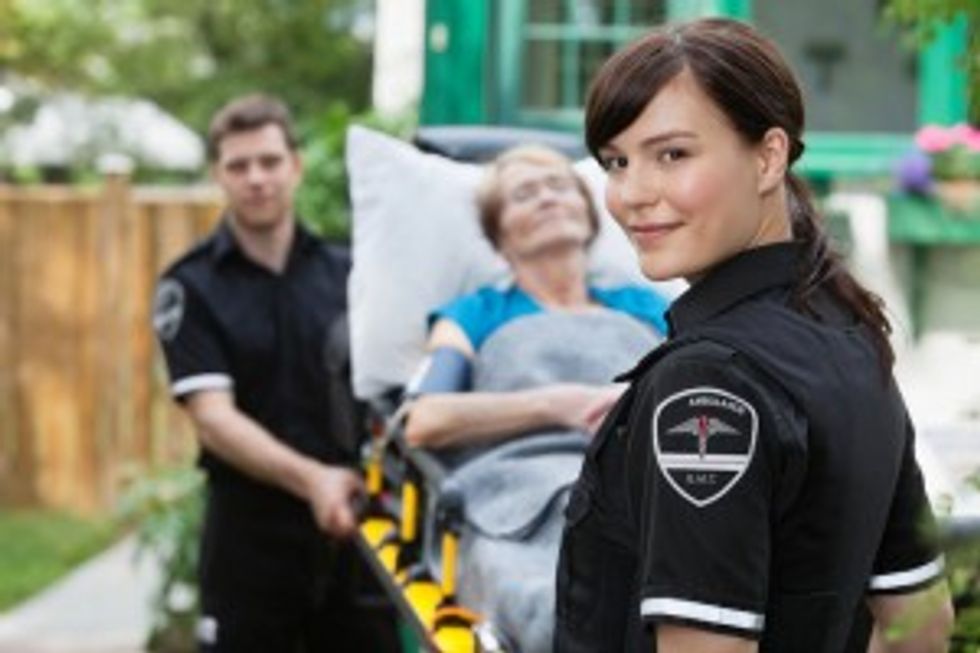 Considered working as a law enforcement or emergency services worker? This interview will take you through the ups and downs you can expect as an emergency medical technician, what it takes to land the job, what you can expect to earn and more. This is a true career story as told to JustJobs and is one of many interviews with emergency service professionals which among others include an emergency services coordinator, a forensic pathologist, and everything in between. I am an emergency medical technician (EMT) working for the Fire Department of New York. I have been an EMT since 1997. The three adjectives I would pick to describe myself are "caring," "responsible," and "fun." I am a white female, which has not helped or hurt me in this position. I have experienced some discrimination from the people we help -- once a guy asked me if I could perform CPR on him because I looked so pretty -- but you just have to brush it off and move on. As an EMT I work the 10 PM to 6 AM shift, riding around in an ambulance and responding to calls. Because it's the overnight shift we get a lot of gunshot and stabbing wounds, plus the occasional alcohol poisoning or drug overdose. We rush to the scene, evaluate the victim's medical situation, then decide whether we can treat the victim on-site, during the drive to a hospital, or wait until a doctor can see the patient. For a gunshot wound, we mostly try to stop the bleeding. We're not trained to perform surgery or take out the bullet – that sort of thing waits until we get to the hospital. There's a misunderstanding we do a lot of treatment in the ambulance while we're driving. For the most part it's too bumpy to do anything other than stabilize the patient. I would rate my job satisfaction as a 7 or 8. I'm helping people who might otherwise die, which feels great, but the hours are not fun. I get home in time to wake up my kids, make them breakfast, and take them to school. Then I go home and fall asleep so I can be up in time to pick them up. I make dinner, help them with their homework, put them to bed, then head off to work. I don't know if this job is my calling -- I think right now I would rather spend more time with my kids, but the job pays decently. I got a unique start in this job. My father had a heart attack when I was 23, at a time when I still didn't know what I wanted to do for a career. When the EMTs responded, I was so grateful and amazed at what they did for a living. I wanted an opportunity to help save other people's loved ones. I had to learn a lot of things the hard way in this job. The hardest of all is probably dealing with death. Sometimes we respond to calls where the dispatcher tells us the person is already dead. We rush to the scene but often it's apparent there's nothing we can do. The worst are the gunshot wounds -- you know the person died instantly, but their families just want you to be able to do something. Usually the police are so involved in their investigation that they neglect the emotional needs of the families. I try to be reassuring when we take away someone that things are going to be okay, even if I know that it's not. In the working world I learned a lot of things school never taught me, especially driving school! EMT drivers are just on another plane of existence. We get to do some crazy things to try to make it to the scene a little faster. My driving instructor would faint if he saw some of the things I've done to get through traffic. The strangest thing that ever happened to me was when we got an emergency call that woman's husband had died. We rushed to the scene and found this little old woman in an apartment by herself. She kept saying her husband was dead, but the house was obviously empty. We did a little investigating and apparently the woman had dementia, her husband had died over twenty years ago of a heart attack. I felt really bad for her, but it was a very strange thing to have happen as an EMT. I get up and go to work each day for my kids. I know the people we're helping are someone else's mother or father, and I think about how grateful I am my own father was saved by the EMTs who responded. The job is definitely challenging, and there have been times when I wanted to quit. The stress is worst when you arrive on the scene of a fatality, but significant parts of the day are spent waiting for something to happen, so it all balances out. My work-life balance isn't great as a single mother, but I have a job where I can see my kids in the morning and after school. I can't complain about that. I make about $50,000 per year, which isn't great for New York City but goes further on Long Island. I also get four weeks of vacation each year because of the high-stress nature of the job. JustJobs.com is a job search engine that finds job listings from company career pages, other job boards, newspapers and associations. With one search, they help you find the job with your name on it. Read more » articles by this approved business partner | Click here » if you’re a business Nurse's aide image from Shutterstock