Why You Shouldn't Go to Work Sick 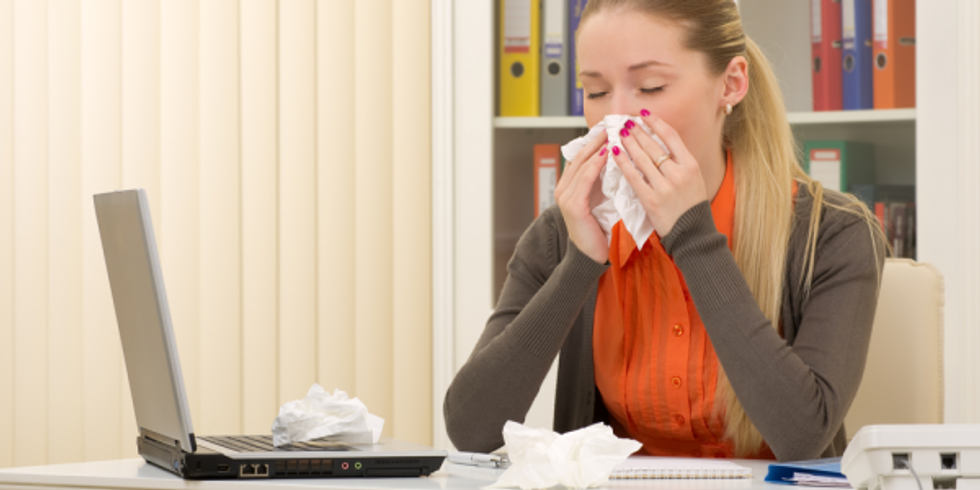 Call it an overdeveloped sense of duty.

Perhaps the boss is so cheap they don't offer sick days. Or maybe people are fearful of “missing something" while out of the office. Or simply having imminent deadlines dangling overhead that must be met otherwise heads will roll...

Whatever you call it, it's an ugly workplace truth.

Time and time again (especially in the winter season), really sick people who SHOULD NOT be at work drag themselves into the office to share their cold/flu/sore throat and spend the entire day wheezing, hacking, and sneezing, all the while fitfully pumping the Purell container on the edge of their desk to clean their hands in a feeble attempt to “sanitize" their work space.

(Not that the HVAC system doesn't simply scoop up their cloud of contagion and spread it evenly throughout the office, anyway.)

I loathe colds, but I also loathe people who try to be valiant and tough by struggling into the office, and end up spending very little time working but enough time sharing their bug. Most of them are ordinarily wonderfully pleasant co-workers, but once the germs invade their bodies, the viruses seem to take over their brains, too.

This loathing... it's purely selfish, actually.

I just know once Sickie McSickSick arrives in the office, flush-faced with fever, the odds have just skyrocketed I will soon be feeling as miserable as they are... and shortly, all of my work will be impacted just as much as theirs.

And the fact they coughed all over the copy machine isn't making me feel any better, either. Time to sneak out the sanitizing wipes...

So, really... why can't we just stay home when we are sick, or at the very least, in the contagious phase (24-48 hours after coming down with the bug)?

We don't want to be there. Our boss doesn't want us there either, and neither do our co-workers.

Will the world really end if we aren't sitting at our desk? What in the heck are we so afraid of that we drag ourselves in despite wishing desperately to stay in our warm bed and pull the covers over our heads?

Money-wise, any smart manager would realize by offering (then enforcing) sick time will ultimately reduce the ripple affect (and therefore, lost productivity) caused by other staff catching the bug currently making the rounds, then calling in sick themselves. What little gains made by someone coming to work with the flu are quickly lost by additional staff subsequently picking up the bug and being absent in days to come.

I don't know about you, but trying to focus on an important task while burning away at a 102+ degree fever isn't my idea of fun. You can probably also make a good bet the task might not be up to the usual quality when completed by someone in a delirious state of mind.

So, do the rest of your co-workers a favor and take the day off, and get some rest. Your fellow employees will be much more appreciative and productive as a result!

Dawn Rasmussen, CMP, is the president of Portland, Oregon-based Pathfinder Writing and Career Services. Clients from across the United States and Canada and from all career levels have benefited from Dawn's highly-focused and results-oriented resume, cover letter, and job search coaching services.

Like most professions in the post-pandemic world, project management has undergone yet another conceptual transformation while also redefining how the projects of the future will be managed with the release of the 2022 PMI Talent Triangle.