Are You Truly Committed To Your New Year’s Resolutions? 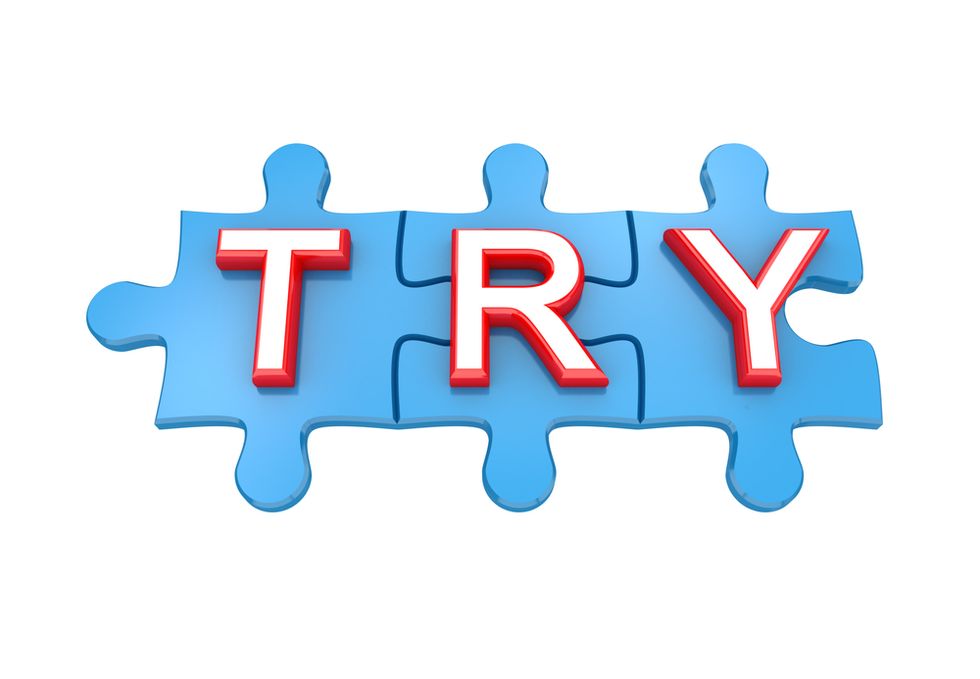 A good friend of mine recently sent me his New Year’s resolutions:

I was taken aback by number three. First, it was the only one that required specific action, and I wondered why he would choose returning e-mails above all the other important actions to take in this world, and over a more general commitment to “Keep in close and regular contact with people important to me” or “Take action quickly on items of importance.” Even more than that, however, I was struck by the insertion of the word “Try.”

I have spent the last 10 years or so reducing the incidence of the word “try” in my spoken and written communications. In a women’s empowerment program I was taught, “Trying is lying.” In a completely different seminar, the instructor had someone hold a tissue box in the air and said, “Try to drop the tissue box.” The person dropped the tissue box, and was met with, “No, you just dropped the tissue box. I told you to try to drop the tissue box.” In another seminar, a different instructor did the same exercise, asking a participant to “Try to pick up that chair.” Trying to pick it up looked like holding on to the chair and pretending to pick it up but not actually doing it. “Trying” to do something, as illustrated in these examples, is as good as not doing the thing at all. You’re not doing it, and you’re not not doing it. Trying leaves you in an in-between place that, in my understanding, is ultimately powerless and ineffective.

We as human beings often use trying as an excuse. Have you gotten that project done? “No... but I tried! I just kept getting distracted.” Have you lost the weight you said you would? “No... but I tried.” Why isn’t your relationship going the way you want it to? “I don’t know... I’m trying so hard to make it work.” We say things like “I’ll try to be there on time” so if we’re not on time we haven’t broken a promise. We human beings are so sneaky! Ultimately, a choice is required. Either you do it or you don’t. If you don’t do it, I believe the most powerful stance is to take responsibility that you didn’t do it. If you’re still committed to a result, then do something else that works to get that result. As another wise person pointed out, the way to attain any goal in life is to keep taking action until you achieve it. Sounds so simple doesn’t it?

My New Year’s resolution friend disagreed with my take on trying. He wrote, “I affirm the importance of stating, ‘I will try.’ It’s like saying, ‘I intend... .’ It sends a message — to myself and others — about how I am organizing my spiritual energies.” When I asked why he didn’t write “Try” for his other resolutions, he responded, “... It’s the only one of the three that doesn’t come to me naturally. So I must try harder. ” (He also mentioned if following number three were to contradict number one and/or number two, he would choose not to follow number three. We have all seen the negative consequences of impulsive or compulsive e-mailing!) I understand the value of compassion, and I understand we sometimes go through stages in our level of commitment to a goal. Perhaps a gentle entry (like a promise to “try”) can be useful for taking on promises we don’t know if we will keep. Certainly, if we don’t meet one of our promises, it doesn’t help to beat ourselves up about it. Using the word “try” lets us succeed even when we fail. But can’t we have compassion even if we frame our promises as absolute? If I resolve to “answer e-mail promptly” instead of to “try” to do so, and then I don’t answer promptly, I might be empowered by acknowledging I didn’t do it, looking at why I didn’t do it, and, if appropriate, making a new promise or doing it a different way next time. To me, that’s “keeping it real.”

New Year’s resolutions are notoriously not kept, and I wonder if the reason is people put a silent, implied “Try” before every one of them. If we truly resolve to do something, rather than to try to do it, we live a more powerful life and one where results will show up with more reliability. At least my friend put “try” where it could be seen, instead of pretending something was true that was not. A straightforward acknowledgement of one’s tendency toward fallibility might be more powerful than having “trying” live in the unsaid. At least with an honest promise, there’s room to grow. In the end, we must each choose the language and intention that work for us, in service of living up to our greatest promises and resolutions. Enjoy this article? Check out these related articles:Photo Credit: Shutterstock
From Your Site Articles