The Inside View Of A Restaurant Chef Job 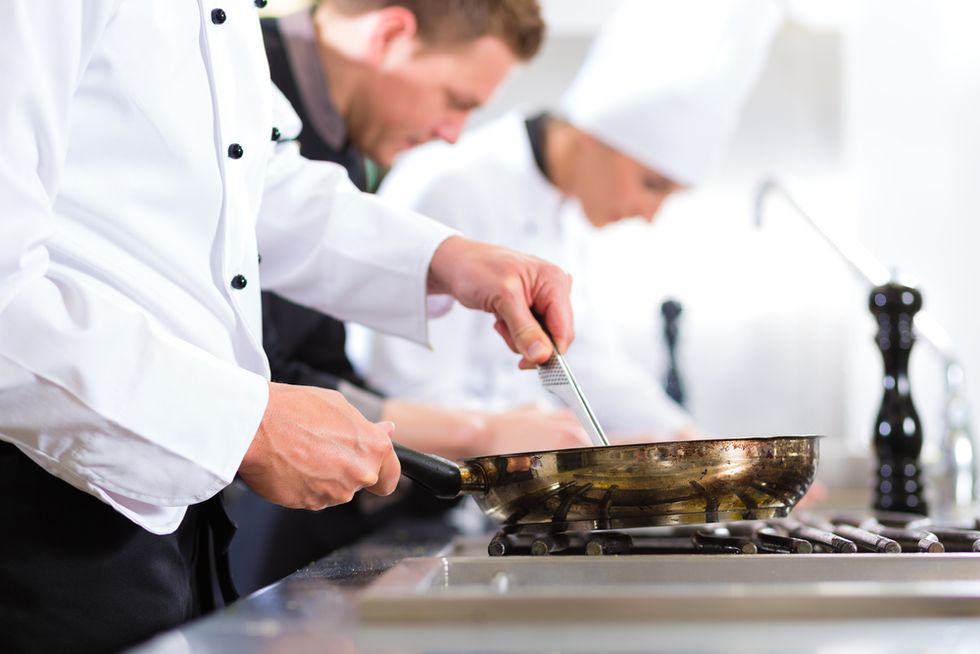 I am the head chef at a small seasonal restaurant on a remote island in the southeastern part of the state of Alaska. The business I work for caters to high-end sports fishing vacations. I have done this work for six years and normally work for about five months out of the year. Our season runs from May until the end of September. It would be difficult to attempt to describe what I do in a succinct manner. Every day is completely different. Food and supplies arrive by float plane, and even during the summer, weather conditions can be bad enough so that the planes don't fly. When this happens, we often have to improvise meals and make do with what we've got on hand. At my job, I normally am the dinner chef but I need to be ready to jump in elsewhere at a moment's notice. At this time I would rate my job satisfaction at an eight on a scale from one to ten. The only thing that holds it back from me giving it a rating of ten is that sometimes I feel that I'm missing out on having a real summer. This past year was especially rainy and stormy. We had wind gusts up to sixty miles an hour on the fourth of July, and on another day in August it rained over eight inches in ten hours. This job moves my heart because I get to live and work in one of the most beautiful places on the planet. Alaska is pristine; the air is always pure and fresh, and it's fun to see the reactions of the people who are lucky enough to be visiting it for the first time. One thing that a lot of people don't know about my job is that those of us who work in these seasonal lodges almost always work every single day of the season. There are no forty-hour work weeks or days off. I got started in this line of work when I was hired as an assistant cook in a logging camp in the same area of Alaska that the lodge is located. I learned a lot there and was hired at the lodge a year later. It seems that everything on this job is learned the hard way. I didn't go to culinary school even though that seems to be a requirement these days for most chef jobs. There was a great deal of trial and error involved when I was new to the field. The strangest thing that ever happened on this job was being stormed in for two solid weeks early one May before we had actually opened the lodge. It's easy to get up and go to work every day when you face a spectacular view the moment you walk out your front door. I think that one of my favorite moments there was when I was finally able to provide all of the produce that we needed for our dinner salads from a greenhouse we had built in the spring. The most challenging part of the job is that we all live and work together in an isolated area for several months. Some of the new employees can't handle it. Either the work schedule is too much for them or they hadn't realized just how remote the lodge is. Some have trouble with company rules. When someone leaves, it puts a huge hole in our staff and everyone ends up working extra hours which can become very tiring. I make a base wage of twelve dollars per hour. With overtime, that adds up. The lodge also has a tip pool for the staff which is divided and distributed on a monthly basis. Our guests are generous people so we do quite well. Last season I brought in over sixty-thousand dollars. Since it gives me so free time during the rest of the year, the salary is reasonable to me. I suppose you could say that I take a seven month vacation every year. But I've also earned it by working twelve hour days straight for five months. Most jobs of this nature require graduation from culinary school these days, so I would advise anyone wanting to pursue this line of work to find a good one and to excel in their studies. Sometimes it's possible for people to be in the right place at the right time the way that I was, but it just doesn't seem to happen that way that often anymore. In five years I would like to be doing something very similar to what I am doing now, but at my own establishment. I'd prefer a smaller place than the lodge, such as a four or five room inn with a small restaurant. This is a true story as told to DiversityJobs.com where you can find helpful career interviews and job search advice in your desired industry. Visit to find a career interview in your field today. JustJobs.com is ajob search engine that finds job listings from company career pages, other job boards, newspapers and associations. With one search, they help you find the job with your name on it.Restaurant chef job image from Shutterstock

How To Answer The Dreaded "Tell Me About Yourself" Question

The dreaded interview question, "Tell me about yourself," stumps a lot of folks. People of all ages and experience levels often fail to answer this one correctly, in a way that conveys meaningful information to the interviewer—information they will actually use to consider your candidacy.

Read moreShow less
how to answer tell me about yourself
Popular

I think one of the hardest things about networking events is just getting a conversation going with someone—without being awkward about it. Approaching someone new can be stressful, but it doesn't have to be. So, what are some natural and easy ways to break the ice?

How To Answer The Dreaded "Tell Me About Yourself" Question