5 Tips For Dealing With A Hot-Head Boss 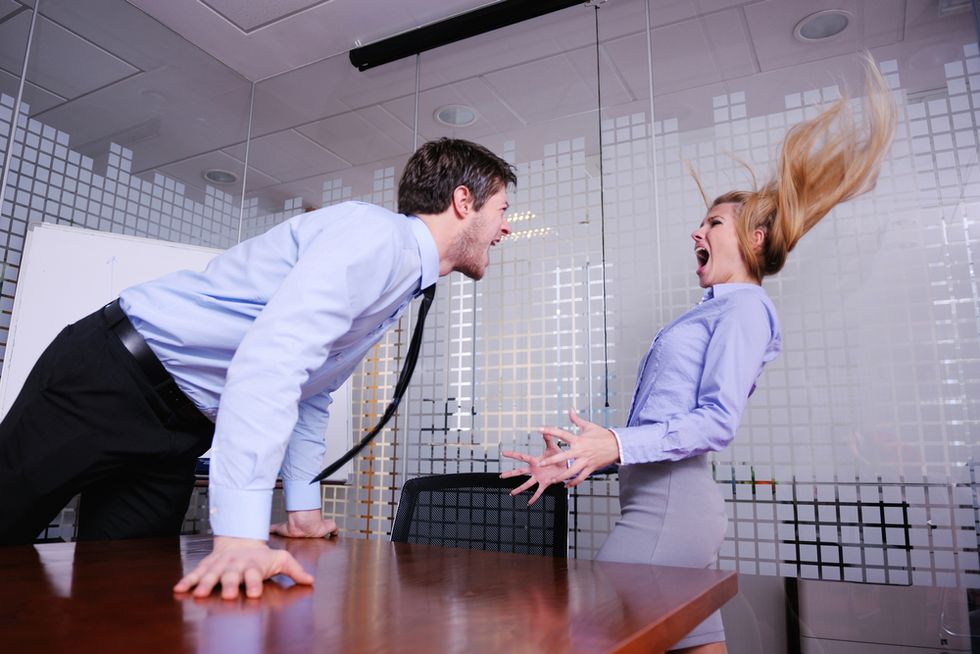 It can be tough dealing with a hot-head boss. But how can you handle his or her hot temper and keep your cool at the same time? Related: 7 Things Your Boss Won’t Tell You If you missed quasi-celebrity and full-fledged entrepreneur boss Patti Stanger berating her stylist, then you don’t watch enough reality TV. And, you missed a great learning moment.

Millionaire Matchmaker and entrepreneur boss, Patti Stanger, arrived at a fitting with her stylist and wasn’t happy with the selection. (For the guys: fitting = trying on clothes, stylist = person who picks pretty clothes.) I’ve watched enough Rachel Zoe to know celebrities don’t always like the first dress a stylist shows them. But rarely does it turn into a confrontation like we see in Patti’s clip. Regardless of the stylist calm demeanor, or her attempts at providing solutions, there was no stopping the verbal beating that was coming. Patti was in fight mode.

Here’s Why It Happened

Simply put, it’s a matter of fight or flight. An area of the brain called the amygdala reacts to stress by triggering either a fight or flight response. By nature, entrepreneur bosses are fighters. They fight to make their ideas a reality everyday despite the inevitable stress. It’s the secret to their success; a willingness and tenacity to keep charging forward, no matter what. This means that in stressful situations, a Fighter Entrepreneur’s knee-jerk (heavy on the jerk) reaction will be to go to battle. The problem arises when the fight trigger can’t be controlled.

A Fight To The Death

Accompanying the fight response is a surge of adrenaline. A great example of this also comes from reality TV. Watch as New Jersey housewife Theresa loses control when her fight response is triggered. (Get past the 15 second ad - it’s worth the wait!) For almost two full minutes, she is incapable of regaining her composure! Toward the end of the clip her actions resemble a seizure. She just can’t stop the adrenaline. Patti's reaction was similar, albeit slightly more controlled. (Patti could at least string sentences together.) Patti made her point, rudely but clearly, early on. Yet she continued with the abuse. Like the New Jersey Housewife, she couldn't stop the rush. Career fitness Coach Malcolm O. Munru suggests this is a type of bullying in the workplace, and offers five ways to deal with this Fighter Entrepreneur:

1. Don’t Try To Calm Them Down

When Patti’s stylist tries to cool the situation, Patti’s pitch raises notably and she screams, “Nooooo. I want you to understand what you did wrong!” It was already abundantly clear what the stylist had done wrong. But Fighter Entrepreneur Patti is still rushing with adrenaline, and any attempt to calm her simply amps her up.

2. Don’t Try To Rationalize With Them

When the fight response has been triggered, there is no rationalizing. Patti makes this clear when she starts the conversations with, “Don’t talk!” Not a rational request among professional colleagues.

3. Don’t Argue With Them Or Further Provoke Them

Threats typically fly during these types of rants. Patti issues several vague threats including “You’re never going to be a stylist,” and “Nobody has ever done that for you.” Joining in the fight, will only make this worse.

4. Don’t Try To Win The Argument

Patti’s instructions, “Get your ******* feelings out of the ******* room,” are words to live by. Although in this situation, she was the one in need of this advice. Oh, and watch more reality TV. Bob Sutton, author of Good Boss, Bad Boss and the No @$$ho!e Rule, says abusive bosses like Patti Stanger foster ineffective employees. He cites a study showed nurses who feared humiliation and punishment from supervisors didn’t report drug-treatment errors. Maybe Patti’s stylist should find one of these nurses and commiserate over a tranquilizer cocktail. My Advice: The Fighter Entrepreneur lacks the ability to respect others. If this is your boss, run while you still can. Stuck there? Then develop thick skin and get ready to spend a lot of time in your mental happy place. This post was originally published at an earlier date.

What To Do When You Have A Bad BossHow To Work Your Bad Boss6 Traits Of Bad BossesPhoto Credit: Shutterstock