I Quit! 7 Crazy Ways People Have Left Their Jobs 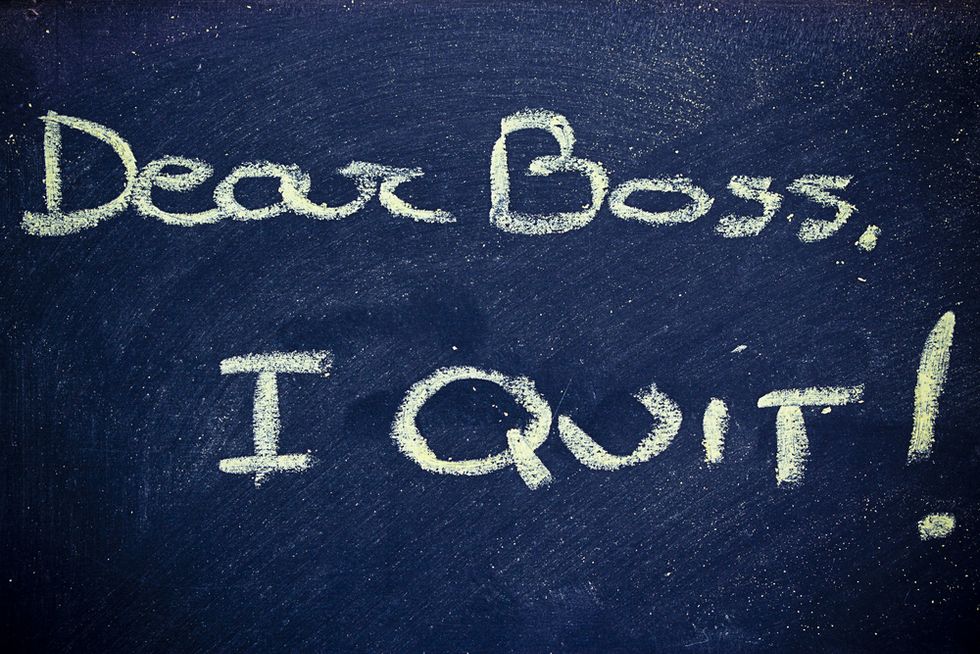 Had enough of the humdrum nine to five? Or has the boss become too much to take?Related:‘Should I Quit My Job?’ – 11 Critical Questions To Ask Yourself There are probably a dozen reasons why you might want to leave your job. So, if you’ve decided it’s time to move on, EuroMaTech’sMatthew Crist presents a collection of crazy ways people have quit their jobs:

1. By Making A Viral Video

Writer Marina Shifrin uploaded an epic video onto YouTube with one simple message for her boss: “I quit!” Having previously worked at a video and animation firm, she was in the perfect position to make the venomous video; which sees her dancing around her office at all hours of the night while describing exactly why she needs to leave her job. The video has since become an Internet sensation with over 17 million views – becoming a huge hit with disgruntled employees everywhere.

2. By Sending Letter To The Paper

In 2012, Greg Smith quit his job at investment bank Goldman Sachs with a scathing resignation letter that he didn’t send to his boss. No, he sent it to the New York Times! Needless to say, there was no going back after such a high profile exit. Though as they say, when one door closes another one opens. His dramatic exit might just have landed him a new career - as author of a million-dollar book deal focusing on his former life at the financial giants.

Ever wanted to just walk off into the sunset and vanish, never to be seen again by the colleagues that you hate or the boss that makes your life a misery? You could always just set your status to “Out to Lunch” and never come back, or maybe, make it a little more entertaining. Take the example set by flight attendant Steven Slater. Fed up with his job at JetBlue, he took his exit into his own hands. After landing at JFK airport, he released a curse-word-infused frenzy over the microphone, grabbed some beers, and slid down the plane’s emergency slide. Let’s just hope he didn’t have to wait for his luggage in the terminal building.

Why have a private chat with your colleagues when you can blast off a message for your many followers to see? Well, ask Jonathan Schwartz. That’s exactly what he decided to do when he had enough of being CEO of Sun Microsystems. Undeterred by the effect it might have on his future career opportunities, Schwartz said it loud and said it proud.

5. By Putting The Icing On The Cake

“If I knew you were coming, I’d have baked a cake,” so the song goes. But how about a culinary creation to say, “I’m off”? When Chris Holmes became disillusioned with his job as a border control agent at Stansted airport, he decided to write his resignation letter in icing on a freshly baked sponge. It was the natural thing to do for someone who harbours an interest in working in the catering industry, and the fact that his online company has since gone from strength-to-strength has at least meant he wasn’t left eating his words!

6. By Instigating Your Own Downfall

You’ve not been living up to expectations, the boss knows it, you know it, everyone knows it. It’s only a matter of time before you get the dreaded call into the office to “discuss your options.” Well, one option is to not let things get this far and instigate your own downfall. Inspiration can be taken from US chat show host Conan O’Brien, who created his own resignation letter in the most original way. Spending wads of NBC’s cash during his last shows by putting mouse ears on a Bugatti Veyronn, (the most expensive car in the world) and having the band play a Beatles song, costing the network a cool half-million dollars ensured O’Brien left the company – admittedly with $45m in his back pocket.

7. By Quitting With Dignity

Groupon CEO, Andrew Mason, penned a memorable note to his employees when it was time for him to leave the daily deals giants: "People of Groupon. After four and a half intense and wonderful years as CEO of Groupon, I’ve decided that I’d like to spend more time with my family. Just kidding — I was fired today." Honesty is always the best policy when quitting a job, as you never know where your career path will lead you next, well unless you know you can get away with it of course!

Too Legit To Quit: 9 Reasons To Stay At Your JobQuitting A Job Doesn’t Make You A QuitterWhen Is It Too Early To Quit?   Photo Credit: Shutterstock