Why Your Network Isn’t Going To Help You 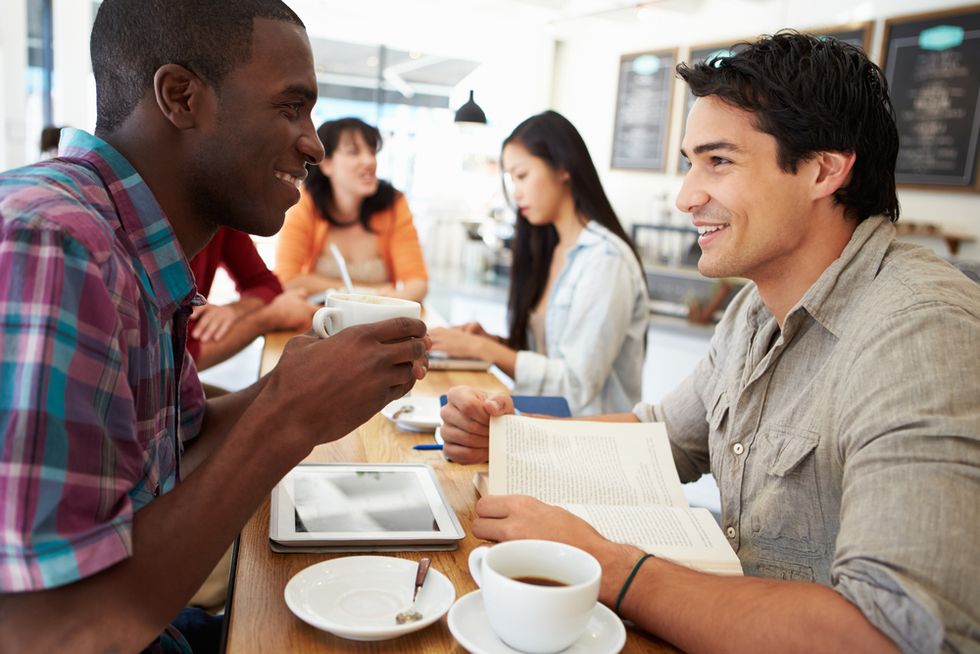 Fresh-faced graduates receive the same advice from every podium speech they hear before going up to the stage to pick up a piece of paper they spent four years earning and haven't started paying for: Do what you love, be happy, always wear sunscreen, and success is about building a network around you. What if your network isn't going to help you?

QUIZ:What Kind Of Networker Are You?

So, you go about building a network of friends, colleagues, old professors, or high school teachers. And of course, you gravitate towards like-minded folk. People in your industry or who have helped you understand that what you're doing is what you want to do for the rest of your life. People who will remind you the degree that probably put you in debt for the at least the next fifteen years wasn't a waste of time. But then you hit a moment, three years down the line, or five, or maybe twenty. And you realize you aren't happy. This isn't what you wanted, and it took trying the career that you're in for as long as you did for you to realize it. And sometimes that happens. It's in our nature to change. Sometimes that change is big, and the job we want and the job we're in are two completely different things. And at that point, you need to scrap the majority of that network you spent years building to pursue something new and fresh. You need to build a new set of like-minded people in the career you want to go into. It may feel like you're 23 and awkward all over again, but if this new career is what you want to do, the process is worth it.

One of the greatest obstacles to changing careers - or change in general - is that we get trapped by the strictures of our social circle. That social circle includes your network. If you're a lawyer, the network you've built for yourself over the years undoubtedly includes other lawyers. The lawyers in your support system will probably ask you why in your right mind you wouldn't want to be a lawyer. They love it, so you should love it, too. You were happy a month ago - nobody can change their mind that quickly. And if you're in a career that is tedious, mind-numbing, and dull, your support network will be even more vocally against your realization; misery loves company, after all. The people that you've spent years spiderwebbing between can't help you learn, grow or understand life in your new career because they don't know it themselves and the knowledge they have is the same as yours: slim to none. You need to get away from the yes-men and parallel thinkers that your current network is made up of to find people in your field of interest and work with them.

Your Old Network Knows Someone

You're not quite starting at the bottom of the ladder when taking those steps towards a new career. Outside of delicious holiday dinners, this is one time your extended family can be quite helpful - that uncle who seems to know everyone will probably know someone who is in the industry you want to go into. And while you may need to scrap the people in your network, don't burn bridges. Their own network could put you in touch with the perfect person. Nothing will be of more help than talking to a real person who has firsthand experience in the profession that interests you. Ask around for anyone in your circle that knows someone - or knows someone who knows someone; use six degrees of separation to your advantage. You need to find a way into the industry any way you can. Attend any type of event related to that industry and let people know your intentions. As crazy as it may seem, tell anyone who'll listen what you want to be doing in their industry. Don't hesitate to mention your own interest in what they do. While industry events can be extremely useful to you, blanket events like the ones put on by the local Chamber of Commerce are likely not worth your time - a lot of the foot traffic at those events are people who are doing nothing but selling themselves. They're probably not interested in helping you out. Time is your new precious commodity. When working to break into a new industry, spending your time wisely is critical. Like in-person events, recognize that social networking sites can be massively helpful, but also a massive waste of time if not used well. Use the social network that works most effectively for your networking purposes, whether it's Facebook, LinkedIn, Twitter, or something else entirely. Spend time researching people in your desired industry with whom you have something in common - did you attend the same university? Work for the same company in the past? Have the same babysitter growing up? Live in the same city? Be fearless and reach out to people whom you share a common link with. While it may feel like reaching out to a cold contact, common ground warms a connection quickly, and you'll have something to talk about in the beginning. During my unhappy career as a financial advisor for Wall Street giant Morgan Stanley, I went to an Indy car race and noticed that a former middle school classmate of my brother was racing in it. That second, I decided I would be working in the racing circuit someday and knew he would be my way in. I introduced myself, and exactly one year later, I was a P.R. Director in the Indy Racing League.

Your Network Isn't About You

These connections you build are your new network. Each relationship is intrinsically unstable at the beginning because you initiated it, asking for a favor. While asking for a favor is a way to build trust within your professional network, you need to strike a balance between give and take to maintain the relationship. When I met my new race car driver acquaintance, two weeks after our first meeting I drove all four hours from Tampa to Miami, and told him I just happened to be in town for work; I asked if he'd like to go have lunch. There was no work. I went there just to meet him. Eventually, a friendship grew and a few months later a working relationship started. While not everyone has the ability to drive eight hours in a day to create a nonthreatening situation and meet up with a person, smaller ways of creating balance in the relationship so you don't come across as a potential competitor are as effective. Things as simple as taking someone to lunch or buying them coffee are enough to make someone share their knowledge. People love talking about their successes and have great nostalgia for the lessons they've learned. Most importantly, listen - you're not this person's rival, you're there to learn from them. You won't learn anything while you speak, and most of your connections spend their days listening to other people. Be humble and grateful for the experiences they're sharing with you. You're building a network around you that will be invaluable through this career change and into your new career. Be the person that people want to help: respectful, humble, and confident. Create relationships not just for the immediate take but for the long term benefit to you both, and you're on your way to a successful new career. This post was originally published at an earlier date.

6 Ways To Beat The Ugly Networking StigmaTop 5 Tips To Successfully Attend A Networking EventHas Your Network Abandoned You? 10 Tips To Win Them Back

Alex Simon is a career reinvention coach and speaker. Often referred to as “a master at breaking into sexy and exciting careers", he has promoted world title fights, managed Indy 500 race car drivers, worked for a Wall Street giant, and is the subject of Starsuckers, an award-winning documentary on the pursuit of fame. Check out his website, find him on YouTube, or add him on LinkedIn! Disclosure: This post is sponsored by a CAREEREALISM-approved expert.

Read moreShow less
finding a job during a recession
Community