Why Political Discussions Should Be Avoided At Work 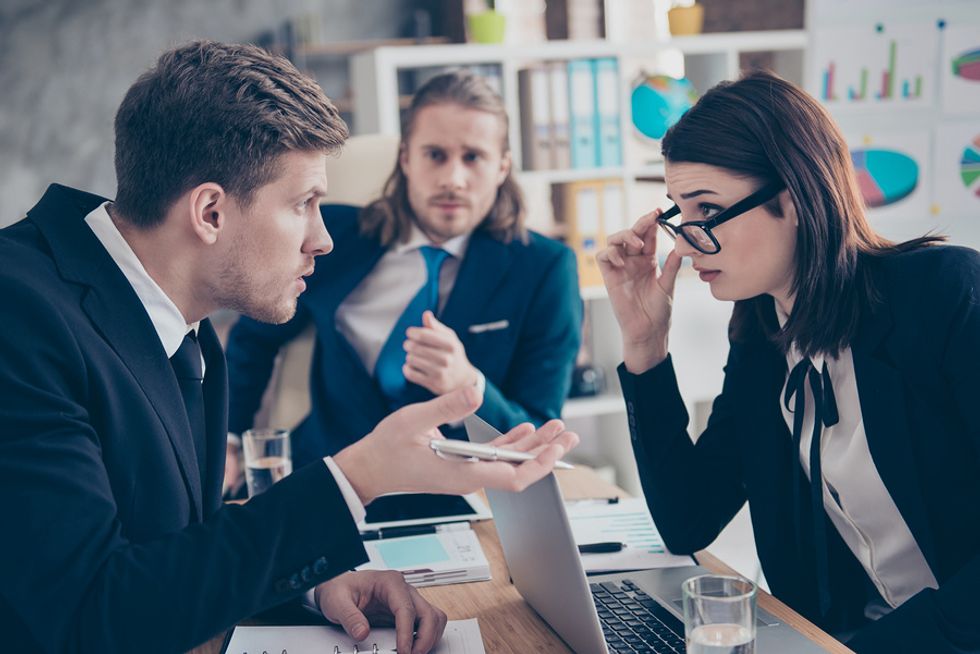 Whether we like it or not, politics are part of everyday life. But they don't have to be part of work life.

In fact, to keep your work life bearable, discussions about politics should be kept to a minimum or outright avoided.

There's already enough stress in the workplace, and political discussion sometimes spirals into unnecessary drama that can divide an office. Here are some things to keep in mind when the discussion at work turns political.

Politics Can Be An Emotional Subject To Some

In these cases, what you may think of as a simple political disagreement could trigger an emotional response from a co-worker that could make things awkward for the entire workplace. It could even damage the professional relationship between you and that co-worker.

There's just too much risk involved whenever you bring up emotionally-charged political topics. You don't know enough about your co-workers backgrounds and why they think the way they think.

It's not worth it!

A Person's Political Views Are Irrelevant To The Job

In a majority of cases, a person's political views have no bearing on how they perform their job.

If you have an amazing boss who delivers results at the workplace and treats employees well, that's all that matters. As long as your boss isn't pushing his/her political views on you, it shouldn't matter who your boss voted for in the last presidential election or what his/her political beliefs are in general. The same goes for any co-worker you get along with or does his/her job at a high-level.

The problem with having any type of political discussion at work is the unintended consequences that may come with it. For example, you may have a political disagreement with a co-worker and start viewing them differently or treating them differently, even if that wasn't your original intention. You also don't want to put yourself in position to be viewed or treated differently.

While many people are able to dismiss political differences, it can be challenging for some.

There's Plenty Of Small Talk To Get Through The Workday

First and foremost, you're at work and workplace tasks should dominate most of the daily discussion. But beyond that there are plenty of other things to talk about during the day. Keep the conversations light.

Family and pets are common topics that tend to be non-controversial, along with discussions about favorite television shows and sports.

Much of the workday is usually very tasked-focus, so when you do have an opportunity to chat with co-workers why would you want to tackle a subject as serious as politics?

If you struggle finding topics to discuss with co-workers or struggle with workplace communication in general, try our FREE ISAT Quiz to get a better understanding of your workplace interaction style.

People Are So Much More Than Their Politics

As was said above, one of the risks of having political discussions with co-workers is that you may unintentionally start to view them differently. That would be a shame because there's more to a person than their political views.

For example, the co-worker you had the heated political debate with may also be one of the most charitable people that you'll ever meet. You may even support the same charities and could work together philanthropically if you don't let your politics get in the way.

Politics are only one piece of the puzzle but a piece that some people put too much emphasis on. You may have some really great co-workers and you don't want to miss out on getting to know them.

But, If You Do Talk Politics At Work...

Despite your best attempts to avoid it, politics may end up working its way into a work conversations at some point. If it does, do your best to keep it short and not let it get personal.

Agree to disagree is one of the oldest sayings in the book but it holds true in many situations. To accept that you can't find common ground and to agree to move on and move forward is an important skill to have in the workforce and life.

If you find yourself in a political debate with a co-worker, make sure you quickly recognize when to cut it off and agree to disagree.

Also, be aware of co-workers that are uncomfortable by political discussion. It may be that you have a few co-workers you can discuss politics with without issue. But those who don't want to hear it shouldn't have to be exposed to it. Always be mindful of your surroundings.

Politics are a reflection of current events and there will always be a temptation to discuss them at work but most of the time it's not worth it. If politics do enter the conversation, approach with caution, otherwise leave the politics to personal time — Just go easy on the social media posting.

From Your Site Articles
Related Articles Around the Web
workplace drama