The Secret To Being A Great Manager 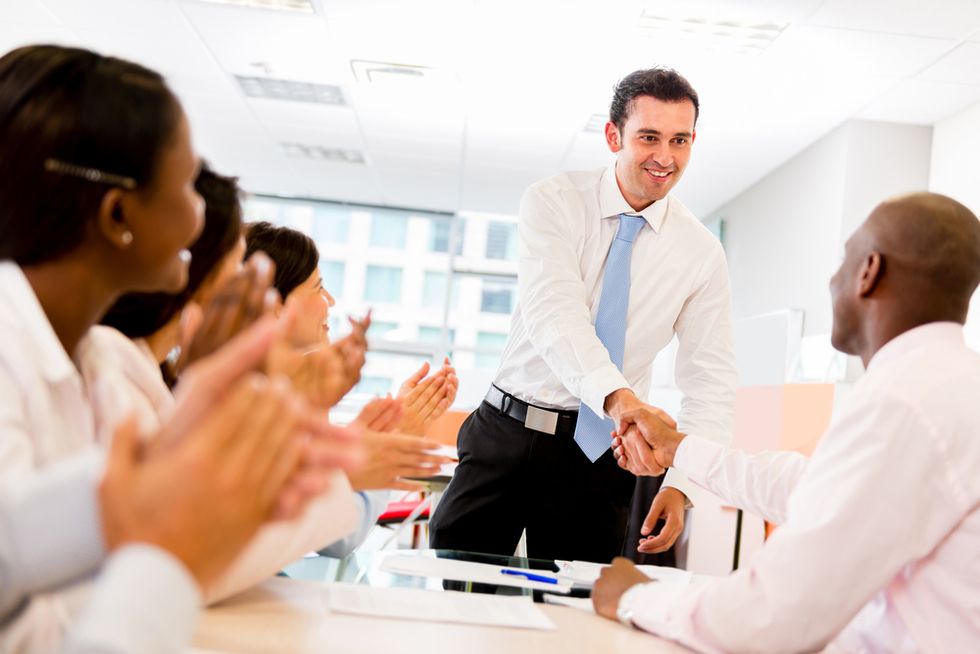 I recently spent an afternoon with a mere 20,000 other people in 100-degree heat at the University of Southern California. Our oldest daughter graduated with her Masters degree. She had successfully avoided the real world for another three years. We were extremely proud of her accomplishment; she put in a lot of hard work. RELATED: 5 Obstacles To Overcome As A First-Time Manager And after two and a half hours of pomp, circumstance, six bottles of water, and the reading of over 900 names (yes 900), the Dean of her school had all the graduates stand and he conferred their degrees upon them as he said, “with all rights, privileges and authority pertaining thereto." This got me thinking. It’s similar when you get promoted to being a manager. You get a new title conferred, a new job, maybe some perks and you get authority, right? You get to give directions, give orders and be in control. This is how managers make things happen, right? Well, from my experience, an education degree and authority have one extremely important aspect in common. They both are earned. As management guru Peter Drucker said, “Rank does not confer privilege or power. It imposes responsibility.” So, if it’s not by means of authority, just how does a really good manager get things done, drive mission, and drive results? It happens through the realization that businesses are comprised of people. Put simply, a manager relies not on his authority, but on the involvement and commitment of others. Managers, as they develop, begin to realize that their authority has limits. By giving directions, giving orders and strutting your stuff, you may get people to comply (albeit reluctantly), but you won’t get their commitment, collaboration, their energy, or their drive to voraciously pursue a goal. The most important asset as a leader is their ability to inspire and encourage others and to impart purpose towards accomplishing the goals of their team. A well-honed manager and leader doesn’t use the word “I." They only think “we." They take responsibility for their team, give credit to “we” and through this, not through their authority, instill trust and respect in those they lead. What this translates to is that your success as a manager is NOT dependent on the authority that comes with a higher title, but rather, it’s very dependent on who you are as a person. Your character amounts to everything, regardless of what managerial level you’re at in your organization. You may have a flashy title that includes words like “global," "worldwide," or “intergalactic," you may get to move out of the cube farm to an office, you may even have a thousand or more LinkedIn connections, but what makes others want to work with you and follow you are those qualities of personality and character that you have shown through your behavior, day in and day out. People should learn by watching you that you are authentic (there’s only one you regardless of who you’re with), you can be trusted, you care about them and you can be depended on. That’s real authority. Just how then do you "earn authority”? Really great managers and leaders do it by having/doing the following:

So, here’s the net, net. Next to its customers, a company’s most important asset goes down the elevator every night and goes home. Businesses ARE people. As a manager and leader, how fast you get promoted and climb the corporate ladder will be directly related not to the authority you’ve been given, but the authority and respect that you’ve EARNED with people, whether they report to you or not. Yup, authority is just like a college degree. It comes the old fashioned way… You earn it. This post was originally published at an earlier date.

#1 Key To Becoming An Effective Leader Managers: Get Things Done More Efficiently 5 Things To Consider Before You Take That Management Job   Photo Credit: Shutterstock
From Your Site Articles

Let’s make things clear: It's impossible for everyone in the workplace to be your close friend. It's possible, however, to grow positive working relationships with them.