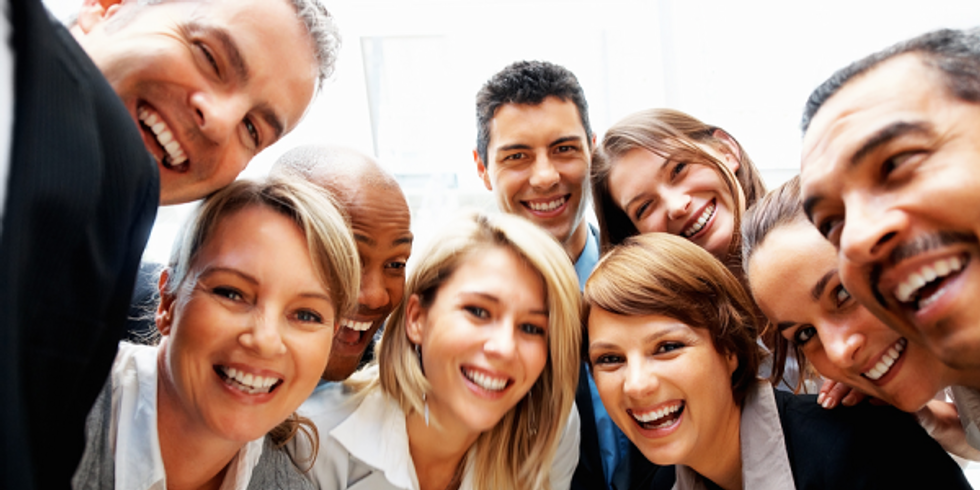 Success Tweet: Jettison the negative people in your life. They are energy black holes. They will suck you dry, but only if you let them. Positive people are optimistic. Negative people tend to be pessimists. I was leading a workshop on career and life success the other day and I mentioned that that self confidence is the hinge on which life and career success swings, and that optimism is the most important ingredient in the self-confidence mix. On the other hand, pessimism can cause the success hinge to rust and become difficult to swing. That’s why some of my best career advice is to hold tight to the positive people in your life and run – as fast as you can – from the negative ones. For me, optimism begins with the ten points of The Optimist Creed. I have given away a couple thousand copies of The Optimist Creed. If you would like one, just go here. Let’s take a look at the difference between positive, optimistic people and negative, pessimistic people. If you read this blog with any regularity, you know I am an incurable optimist. I see problems, failures, and setbacks not only as temporary, but as opportunities to learn and grow. I expect things to go well. When I run into problems, failures, and setbacks, I’m always a little surprised because I don’t expect them. I do however, plan for them. Finally, I never take a problem, failure, or setback personally. I’m a human being. Sometimes I make great decisions. Sometimes I make poor ones. My self worth is not threatened by the occasional problem, failure, or setback. And, I choose to hang around with positive people, not negative ones. I’m a big fan of Mark Twain. One of my favorite quotes of his gets at the heart of surrounding yourself with positive people and jettisoning the negative people in your life...

“Keep away from people who try to belittle your ambitions. Small people always do that, but the really great make you feel that you, too, can become great.”

Negative people are a drag on your goals and your ambitions. They are quick to tell you what you can’t do, offer little encouragement, and hate to see you prove them wrong by succeeding. Hold these kinds of people are arm’s length. Don’t spend time with them. Instead, invest in friendships with positive, upbeat people; the kind of people who not only don’t belittle your ambitions, but do what they can to help you make them a reality. Cynics are negative people. They are also dangerous, because they are seductive. They always have something witty to say about others – usually others’ shortcomings. At first, they seem to be funny and amusing. But spend time with cynics, and you’ll find that they have little joy in life except in pointing out and reveling in others’ problems and failures. Ambrose Bierce may well be the world’s biggest cynics. I often see quotes attributed to him on line. In the early 20th century, he published a book called, The Devil’s Dictionary. Even I admit that some of his definitions are pretty funny. However, I get tired and frustrated after reading more than one or two. Here are a couple of quotes from The Devil’s Dictionary… “Optimism: The doctrine that everything is beautiful, including what is ugly, everything good, especially the bad, and everything right that is wrong... it is hereditary, but fortunately not contagious.” “Calamities: Two kinds - misfortunes to ourselves, and good fortune to others.” No wonder ole’ Ambrose was called “Bitter Bierce” by his contemporaries. First he bashes optimism, then he suggests that human beings see the good fortune of others as a personal calamity. Here are a couple of other entries in The Devil’s Dictionary... “Politeness: The most acceptable hypocrisy.” “Perseverance: A lowly virtue whereby mediocrity achieves an inglorious success.” Do you know any people like Ambrose Bierce? If you do, my best career advice is to hold them at arm’s length. While you may find them to be witty and entertaining at first, they will drag you down in the long run. They will not help you create the life and career success you want and deserve. Point 6 of The Optimist Creed says... “Promise yourself to be just as enthusiastic about the success of others as you are of your own.” This is 180 degrees from what Ambrose has to say. Successful, self confident people aren’t jealous or upset by the success of others. They are genuinely pleased when they see others succeed. They see the success of others as an inspiration. They use it to motivate themselves to achieve bigger and better successes. Negative people choose to see others’ successes as a personal affront. Take it from a career success coach, these kinds of people will not help you create the life and career success you want and deserve. Robert Sutton of Stanford University's book, The No Asshole Rule: Building a Civilized Workplace and Surviving One That Isn’t, does a great job of defining negative people – or “assholes” as he calls them. The first chapter is called “What Assholes Do and Why You Know So Many.” On page 10, he lists “The Dirty Dozen: Common Everyday Actions That Assholes Use.” Check it out. If you’ve spent any time in a large organization, or even a small one, you’ve probably been on the receiving end of many of these asshole behaviors. Truth be told, you’ve probably been on the giving end of many of these asshole behaviors as well. I don’t like to admit it, but I have been both the victim and perpetrator of some of these behaviors. Dr. Sutton explains why a no asshole rule helps create a healthy vibrant workplace… “Allowing a few creeps to make themselves at home in your company is dangerous. The truth is that assholes breed like rabbits. Their poison quickly infects others. Even worse, if you let them make hiring decisions, they will start cloning themselves.” He’s writing for leaders, encouraging them to create what he calls “asshole-free workplaces.” I suggest you create an “asshole-free life.” Don’t let negative people, assholes if you will, into your life. Hold them at arm’s length. In my career success coach talks, I amend his quote. I tell people... “Allowing a few creeps to make themselves at home in your life is dangerous. Their poison will quickly infect you. Assholes try to clone themselves. Spend too much time with them and you run the risk of becoming one.” The common sense career success coach point here is clear. Successful, self confident people don’t let negative people into their lives. They follow the career advice in Tweet 50 in Success Tweet, “Jettison the negative people in your life. They are energy black holes. They will suck you dry, but only if you let them.” Avoid cynics. They are jealous and petty; unhappy when others succeed. As Dr. Sutton of Stanford suggests, avoid assholes – people who are rude, insulting, sarcastic and two faced. They will only drag you down. Make a conscious choice to spend time with positive, optimistic people. Avoid negative, pessimistic ones.

Make sure to check out my website where I focus more on achieving career success and climbing the corporate ladder.
VISIT MY WEBSITE ►
Career success image from Bigstock