5 Networking Mistakes And How To Easily Avoid Them 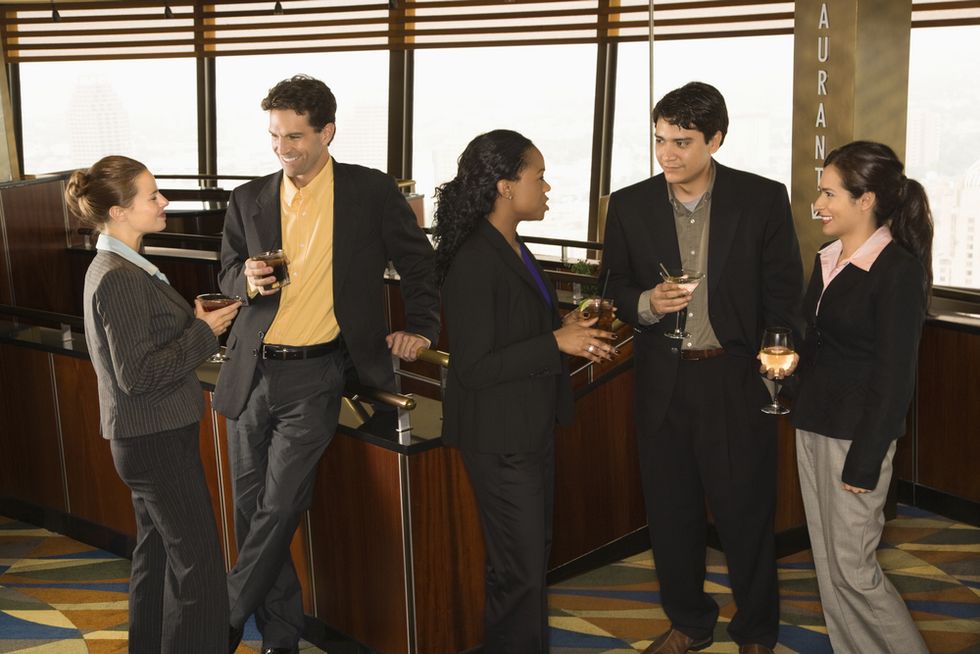 You know the dance—you walk in to a networking event and the room is filled with people that you’ve never met, but it seems like they already know one another. They’re chatting, shaking hands, and laughing. It looks so easy for them. But you want to turn around and leave. Sound familiar? Related: The Jimmy Fallon Effect: 10 Qualities Of Great Networkers It took a long time for me to learn how to connect with others at these kind of events. I used to be one of the first people out the door. But there is so much opportunity within each person. Networking is about building long term connections with good people. These are the connections that will matter to you years later. Here are some mistakes I’ve learned while networking and how to turn them around:

1. Mingling with people you already know

A lot of people, especially the ones who do not feel as social, tend to stick to the groups they know. Networking is about branching out. People are attracted to authenticity, so just be yourself, even if that means admitting that it’s all foreign to you. Be honest. Try something like “I haven’t been to a lot of these events, but it seems like a really great crowd of people. How did you hear about this event?” Quick tip: If you do go somewhere there are people you already know, make it a goal to find someone that would be a good introduction for them.

If I don’t have someone to talk to in the first 30 seconds, I usually hightail it for the coffee bar, head down, keeping to myself. I suddenly look scared, like I don’t know anyone, and like I don’t want to be there. But standing somewhere calmly, taking in the sights and people around, makes you seem more approachable. Find someone else who seems as uncomfortable as you feel. They will be grateful for your easy approach. Quick tip: Walk in like you own the building. That much feigned confidence makes you feel good, and turns into real confidence in minutes.

3. Not reciprocating the favor

People also want to meet you because of your connections. We’re all hooked up in some way or another. Steve Dubin, co-founder of My Pinnacle Network, cautions against becoming this kind of connection.“You know the guy. Very outgoing, loud, lots of back-slapping. The problem? He is the ‘black hole’ of your network. He is the ‘one way’ street who gladly accepts personal introductions but very, very rarely reciprocates.” People are there for the connections just as much as you are. Be sure you’re giving back. Quick tip: When you connect with someone you like, keep them in mind after the event. What connections or referrals could you pass onto them later that would help? Keep a mental bookmark for them, share, and they will most likely do just the same for you.

Business cards are the easiest way to get in touch with another individual. But it’s only a small piece of (high quality) paper. Business card exchanges should ideally happened after you both feel a mutual connection and genuinely want to learn more about them. I’ve had people ask for my card right after introducing themselves to me. They never end up following up. It’s all because we didn’t bother establishing a connection. Quick tip: Only bring a few cards to share with people that you build a rapport with—that way you make sure to give them away carefully. (But bring a couple more just in case someone another “card collector” asks for yours)

5. Not following up after the event

At the event, chatting with new people and getting to know the crowd is half the battle. Following up creates connections and lets the other person know that you want to establish a relationship.You can do this a few ways. Depending on how you’re feeling about the bond, give the person a phone call or send a quick email telling them how great it was to meet them. Quick tip: Think of any other connections or resources that might be useful to them, like an event they might like to go to, or a helpful referral that might be of value to them. Networking is all about building long-term connections with others. It’s a reciprocal relationship that helps you through referrals, relationships, events, and resources you may have never heard of otherwise. Here’s the BIG secret: It’s really about being open to meeting new people and having a vested interest in their professional well-being. A giving relationship gives back. What are some of the ways you’ve opened up while networking? Would love to hear your feedback in the comments below! This post was originally published at an earlier date.

Why You Shouldn’t Underestimate Your Personal Network5 Tips For Better Super-ConnectingHow To Activate Your Network As A Recent Grad   Photo Credit: Shutterstock