5 Cool Things to Look Forward to in the Future Workplace 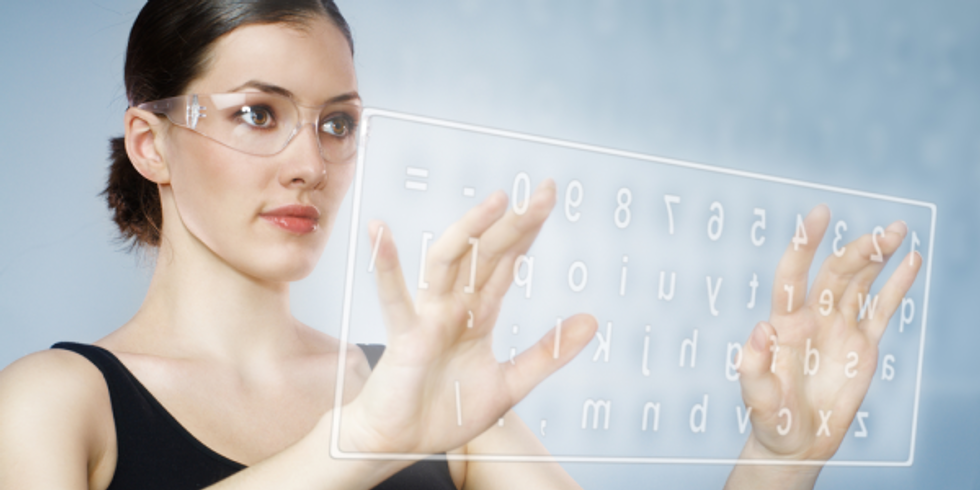 From Tupac’s holographic resurrection, to the reality augmenting Google glasses prototype, to the Curiosity rover’s landing on Mars—the year 2012 alone has seen some amazing advances in technology. And Star Trek recently released the first season in Blu-ray last month – making the futuristic, sci-fi saga feel vividly real! All of this got us thinking: Where will our technological advances take us in the next 20 to 50 years? What kind of high-tech work environment will our grandkids’ children experience in future jobs? After all, some technology featured on Star Trek, like the transporter (flip phones), tractor beam (optical tweezers or lasers) and Geordi’s VISOR (bionic eye) have all come true! To get a glimpse of the future, we picked the brains of some reputable technology experts who were eager to talk about what the workplace will look like. Check out some cool features we have to look forward to:

1. Everything Will Contain Sensors

Bruce Kasanoff, founder of Sense of the Future, which tracks sensor-driven innovation, says the one thing he knows for sure about 20+ years from now is that we’ll have exponentially more sensors than smartphones, tablets, laptops, and computers combined. “They will be in everything: walls, clothing, appliances, doors, flower beds, cars, trees and—yes—even us,” Kasanoff says. “The FDA just approved the first swallow-able sensor.” The swallow-able sensor that Kasanoff is referring to is the first “digital pill” that can track your health from the inside, according to Medical News Today. You’ll never forget to take a pill again! Similarly, Kasanoff theorizes that in the next 20 years sensors will make it “as though everyone has telepathy,” he says, “through brainwave monitoring and eye tracking, we’ll be able to communicate silently with people who aren’t in the room.”

Several tech experts think workplace mobility and virtual offices will be easier and more prominent than ever before. In fact, Citrix Systems, a software company that provides server and desktop virtualization, conducted a study that found that “twenty-five percent of U.S. adults are expected to be actively workshifting by 2016,” says Julie Bennik, group manager at Citrix. And by “workshifting,” Citrix means flexible work using web-based tools that allow you to work anytime, anywhere outside of the office. With today’s video technology, “you’re still aware that you’re not really ‘with’ that person,” says Jeremy Goldman, social media executive, author and speaker, who would agree with Kasanoff and Bennik on virtualization technologies. “But newer technologies will remove that distinction, and will make the need for a centralized office much less important,” he says.

Gene Dolgoff is the inventor of the first LCD Projector, inspiration for the Star Trek Holodek and current CEO of 3-D Vision. He’d agree with Goldman and Bennik that virtual reality will decrease the use of physical offices. But he goes one step further and says “employees and employers will be in much closer contact instantly due to brain controlled connections and conferences between each other (one-on-one or in groups) as desired in the spur of the moment.” And we’ll be able to dig up info about anything from the Internet at any time under instant brain control, Dolgoff says. So, Googling will be a thing of the past!

4. Computers Will Be Smart and Emotional

Kasanoff also predicts that the few physical offices we do use will be incredibly smart. “Printers will refill themselves with ink. Conference rooms will know when they are empty. Buildings will recognize each occupant,” he says. But that’s not all. Dolgoff, once again, takes it one step further and says computers will also have emotions, creativity, and personality and will work as assistants and friends to their human counterparts. (Screech’s robot, Kevin, from Saved By the Bell comes to mind!). As a result of this mega surge of computerization, computer IT, and tech repair jobs will be increasingly high in demand, according to Dolgoff.

Robbie Abed, CTO of Technori is a huge believer that 3D printing is going to be in the future. He says he first heard this idea from founder of Siri, Dag Kittlaus, as part of a keynote speech at a Technori Pitch Event. In other words, printing a pizza using 3D Printers will be a reality, he says. For the workforce, this means “3D printers will be integrated into the office network which will give employees the ability to send multiple commands to the printer, through a nice, easy to use interface on their desk or one their phone.” There’s a ton more fascinating technology that’s already in the works for jobs across the world—more than this tiny blog post can handle. Of course, these theories aren’t fool-proof. Please do share anything we might have missed! What do you think the future workplace will look like in 20-50 years? Future workplace image from Shutterstock
From Your Site Articles

Like most professions in the post-pandemic world, project management has undergone yet another conceptual transformation while also redefining how the projects of the future will be managed with the release of the 2022 PMI Talent Triangle.