If You Do These 10 Things, You're Probably A TERRIBLE Co-Worker 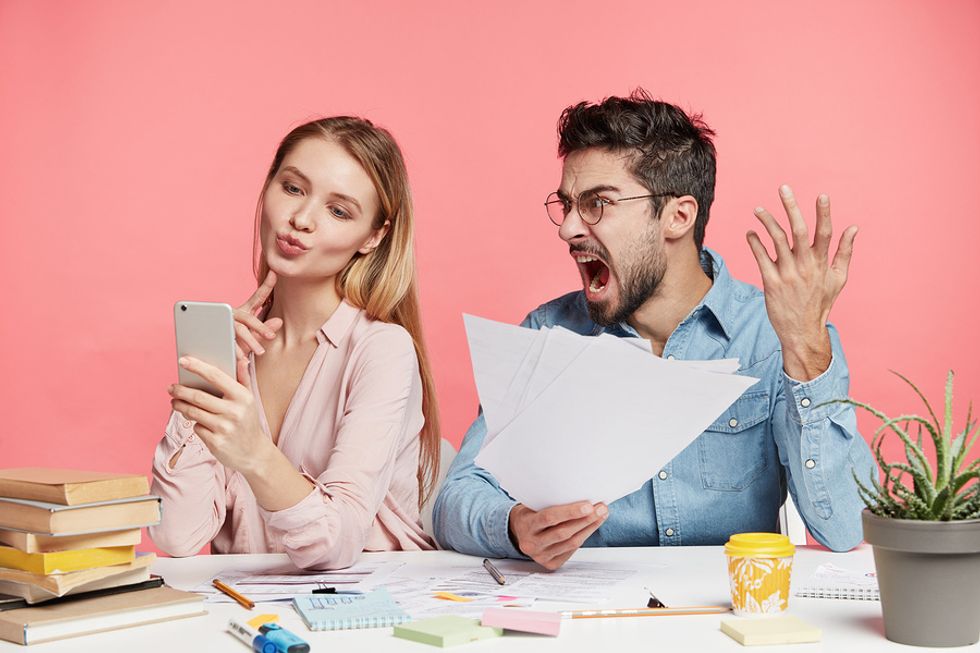 One of the best things about work is that you get to collaborate with your co-workers.

However, in offices all over the world, there are co-workers people would rather NOT work with every day.

Co-workers can get labeled as terrible for multiple reasons. And that label can do some serious damage at work.

Here are a few habits a colleague can have that would earn them that bad reputation. Are you guilty of any of them?

Gossiping About Your Co-Workers

It's important to build a team that has respect for one another in the workplace. One of the biggest things that KILLS respect among colleagues is gossiping.

If you talk about your co-workers behind their backs, there's no way they're going to trust you or respect anything you have to say.

Plus, they won't want to work with you if you're talking badly about them. That could have a major impact on your work, especially if you have a project you need help on.

Gossiping could give you a brief moment of satisfaction, but it can really do some serious damage to your work relationships.

Having A Bad Attitude At Work

We've all had bad days at work. We're human, it's bound to happen.

However, having a consistent negative attitude at work will have a tremendous impact on your relationship with your co-workers.

Multiple studies show that negative attitudes can spread quickly, especially in the workplace. That means people will want to stay away from those who generate negative energy.

Also, having a negative attitude at work kills workplace productivity and puts a major dent in workplace culture.

With that being said, take a minute to reflect on your attitude at work. Could it use some adjusting?

Distracting Your Co-Workers While On The Job

Let's be real -- everyone needs a little break at work. It's good to take some time to get away from your desk, whether it's a 5-minute walk around the office or a quick trip to the vending machine.

However, constantly being distracted at work can lead to major problems that impact productivity.

A source of these distractions can come from co-workers.

These distractions may not be intentional, but they can cause other people to lose focus at work.

If you have distracting habits at work, think about how you can curb them. You'll be surprised what it does for your office's productivity.

Taking Credit For Your Co-Worker's Work

Working with a team at work has great benefits. You're able to collaborate with people and come up with ideas you may not have thought of on your own.

That being said, giving credit to your co-workers for their contributions to the workplace is essential to maintain good relationships with them.

If you're collaborating with a co-worker on a project and you want to expand on one of their ideas, be sure to give them credit where credit is due.

If you take all the glory and don't mention their contribution, it will reflect poorly on you.

Not Pulling Your Weight In The Office

When you go to work, it's expected that you show up and actually do work.

However, there are some people who do a lot of showing up...but not a lot of work.

When someone doesn't do their job, they force their co-workers to pick up the slack.

That, combined with the workload they already have, could cause some MAJOR frustration in the office.

Make sure you're doing your job when you're at work. It can be so easy to get distracted, but you have to stay on track and do what needs to get done.

Doing your share of the work will give you a lot of satisfaction and your co-workers will appreciate your contributions.

Your co-workers will have ideas they want to share with the team from time to time.

You may not like these ideas and, as a result, you may shut them down before the team even discusses it.

There are multiple reasons why this is a bad habit in the workplace.

For starters, it could give off the impression that you're not open to hearing new ideas.

It could also give off the impression that you don't care about your team's opinions.

So, before you shoot down a co-worker's idea, take a moment to really think about it and have a discussion with them about it instead of immediately expressing your distaste for it.

Bringing Personal Issues Into The Workplace

It's important to have a good work-life balance.

However, bringing too much of your personal life into the workplace can cause some riffs in the office.

If you vent about your personal life at work, you risk compromising your relationships with your co-workers.

As a worker, you are a business-of-one, which means you want to market yourself the best you can.

Bringing a lot of your personal baggage into the workplace is not a good thing, and will make it harder to market yourself as an employee and co-worker.

Stinking Up The Whole Office With Your Lunch

You know exactly what I'm talking about here.

There are certain rules of office etiquette that go unspoken. One of those rules is not to stink up the entire office with your food. Unfortunately, not everyone follows this rule.

There are some people who have no problem heating up their leftover fish at lunchtime. It may be in the microwave for only 2-minutes, but its impact lasts much longer.

Stinking up the office with your lunch is distracting.

Seriously, it's an issue if the only thing your co-workers can focus on is how your lunch smells.

Being Passive Aggressive In The Office

A workplace culture should be built around mutual respect and trust among co-workers.

Once in a while, you may disagree with your colleagues and that's okay. Disagreements happen, but how you handle it says more about you than the disagreement itself.

If you're passive aggressive towards your co-workers, it will cause some tension in the office.

Being passive aggressive means you aren't being direct with your co-workers about your issues with them. If you aren't direct with them, then how are you going to work past the issue you're having?

Passive aggressiveness will take its toll on the workplace if it isn't nipped in the bud. The best way to curb this is to be direct with your colleagues and have a professional discussion about the issue at hand.

Constantly Showing Up Late To Work

Everyone is late to work once in a while. However, it's an issue if you're constantly late to work.

If you're always showing up late, it shows that you don't respect the work you do.

If they need your input on a project, but you're running late, it makes them crunched for time. That can lead to a stressful work environment.

Showing up to work on time reflects on you as a worker. So, show up on time, and be ready to put your best foot forward.

So, which of these habits is the absolute WORST one a co-worker can have? Tell us in the poll below.

Is there a bad habit we didn't mention here? Let us know on social!

What's the worst habit a co-worker can have?